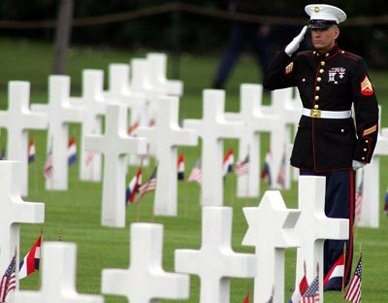 By Mike Krumboltz
For many, Memorial Day brings to mind images of parades and picnics, of barbecues and baseball games. What’s sometimes forgotten are the reasons for the holiday: The sacrifices made by American soldiers in times of conflict.
As the United States’ death toll passes 1,000 in Afghanistan, Memorial Day takes on an especially poignant meaning this year. Here’s a brief look at how the holiday got its start, and how people are searching for ways to honor the brave men and women who have lost their lives.
The first holiday
Originally, the holiday was known as “Decoration Day.” It was started by a Civil War general named Gen. John Logan, who was the Commander-in-Chief of the Grand Army of the Republic. General Logan sought a way to help the country come back together after the horrors and divide of the Civil War.
The holiday was first observed on May 30, 1868, and Gen. Logan chose that date for two very important reasons: First, the day did not mark the anniversary of a Civil War battle, and second “flowers would likely be in bloom all over the United States.” Indeed, many took flowers to Arlington National Cemetery, an activity that still occurs every year.
More on Gen. John Logan
General John A. Logan has a tremendous legacy that goes well beyond his efforts to honor fallen soldiers. According to a museum dedicated to his memory, Gen. Logan led an inspired life and enjoyed a tremendous career. At different points, he was a United States congressman, a senator, and a candidate for the vice presidency. He and his running mate, James G. Blane, lost their bid, but “Logan’s popularity with veterans contributed to the narrowness of the defeat.”
An official holiday
This may come as a bit of a surprise, but Memorial Day, despite having been around for over 100 years in one form or another, didn’t become an official federal holiday until 1971, when Congress passed the National Holiday Act. This created a three-day weekend at the end of May. Prior to this, different states observed the holiday on different days.
The effect on Web search
Web lookups on “memorial day” and “celebrate memorial day” are both up over 500% during the past seven days. Additionally, queries on “memorial day quotes” and “memorial day history” are soaring, as are searches for “memorial day parades” and “memorial day flowers”.
Also worth noting – the “national moment of remembrance.” This moment takes place at 3 p.m. local time on Memorial Day and lasts one minute. According to Remember.gov, “the Moment does not replace traditional Memorial Day events; rather it is an act of national unity in which all Americans, alone or with family and friends, honor those who died for our freedom. It will help to reclaim Memorial Day as the sacred and noble holiday it was meant to be. In this shared remembrance, we connect as Americans.”
The Huffington Post has a nice collection of 15 quotes for Memorial Day. You can view the list here.