How to Banish Negative Thoughts 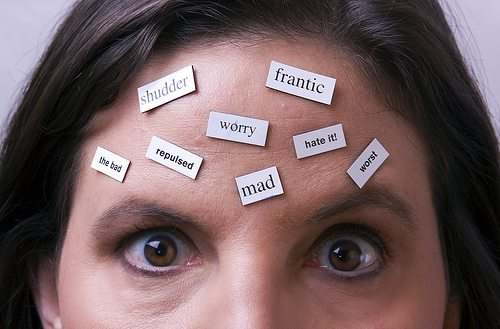 Who doesn’t have negative thoughts now and then? But what if you had a negative thought which was pervasive and constant? Would you know how to get rid of it? Fortunately, there are many methods available to get rid of incessant negative chatter in our heads.
Here is an effective step-by-step process that will work if you use it regularly. As our ongoing example in this process, we’ll use the negative thought, “I’m too dumb to do anything right.”
1.  Turn the thought into a mental image. Imagine looking and acting completely silly. Create the most exaggerated image of yourself you can. Start by envisioning yourself in ridiculous clothes that don’t match.

2.  Choose an alternative thought. For our example, a good replacement thought would be, “I’m so intelligent I can do anything.” Choose something that is the opposite of the original negative thought. Select a phrase that feels right to you, through your whole body.
3.  Turn the new, positive thought into a mental image. You might imagine yourself dressed like Albert Einstein, shouting, “I’m brilliant. I can do anything.” Again, make the image outrageous. Keep at it until the positive thought automatically brings up that image.
4.  Link the two images together. Now, imagine a way to get from your negative image to your positive image. This is almost like you’re the director of a movie; you want to find a way to connect the opening and the closing scenes.

5.  Test out your new mental connections. When you think the original negative thought, the entire scene should flash through your mind. Your mental process should end with the moment where you’re thinking, “I’m so brilliant. I can do anything.” If you’re not there yet, repeat Step 4 until you are.
Although this may seem silly to you, this is a common mnemonic technique. The imagery must be outrageous. This makes your memory’s work much easier.
Also, play around with the perspective. Most people find it helpful to view everything in the third person, as if they were spectators watching themselves in a movie. But you may prefer imagining things from a first-person perspective, in which everything happens to you, as it would in everyday life. Try both perspectives to determine which works better for you.
If you systematically deal with all your negative thoughts, you’ll eventually find that you have very few left. Imagine how your life could change! What might you do that you’ve always been too afraid to try? Now you’ll have the courage to do just that.