I Can’t Believe I Just Finished The Mother Of All Relay Races! 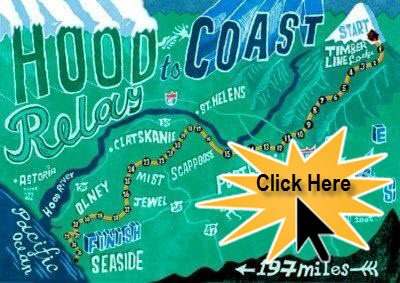 By now I am sure you have heard that I was asked to be a part of a 197 mile relay race called Hood to Coast in Oregon. If not no worries… let me share with you my journey through my 197 mile adventure. I ran the race for Team World Vision to help race money for clean water for South Sudan. In fact Olympic Athlete Lopez Lomong was given 5 teams (I originally thought it was 2 teams) and Lopez gave all 5 teams to Team World Vision.
You see the South Sudan is the area where Lopez is originally from. Now I don’t want to spoil the stories in his book (“Running for My Life” make sure to get your family a copy you won’t regret it), anyways… Lopez has lived there and has seen friends die because of water born diseases. This cause was very dear to his heart. Which was quite evident, but I will tell you a little more on that in a bit.
Thursday, August 22nd… the night before the race we had a dinner with all 5 teams and some very special guest athletes.

My new friend Jason Peterman from Bourbonnais ran the first leg of the race. (That’s him in the middle) 5.68 miles straight downhill… from 6000 feet to 4000 feet. He did AMAZING. I defiantly didn’t want that leg but now I am jealous that he did it.  Maybe next time right?
I ran leg numbers 4, 16, and 28. My first leg was 7.18 miles from 1600 feet to 1150… defiantly not as downhill as Jason’s but because of the decline I was able to run my fastest time per mile ever. I went from a 9 minute per mile pace to a 7:14 per minute mile pace. Yes I’m bragging a bit. 
Boy I wish you could have been there. This was an epic race. And I don’t like to use the word epic because it’s way over used. But really that’s how I would describe it. I mean imagine running your heart out and when you get tired and can’t breathe anymore you start thinking about all the people that have to walk 10-20 miles a day just to get water. And the water is not even clean it’s just wet.

That kept me motivated to run. Also I thought about when Lopez escaped from his captors and how he had to keep running night and day for many days even though he hadn’t even had water or food in days. (You really need to get the book “Running for My Life”). That also kept me motivated to run.
The best thing about this whole trip was getting to know Lopez on a personal level. He road in our van for about 8 hours and we even had lunch with him at a place called FIVE GUYS.
Let me tell you… Lopez was the real deal!

I saw him talk to everyone who wanted to talk to him and take pictures and auto graphics with all who wanted them. From the kiddos to us adults Lopez made everyone feel that you were the only person that existed when you were talking with him.

In fact, later in the day on that Friday I asked Lopez if I were to call my 11 year old son Keegan, who just started cross-country this year, would he talk to him on the phone. Lopez said absolutely. So I did. I called Keegan and Lopez and him had a wonderful conversation. Lopez spent time encouraging him to find his passion and stick with it… even if it wasn’t cross-country.
Now let’s fast forward to Saturday morning 10:48am… the finish line… 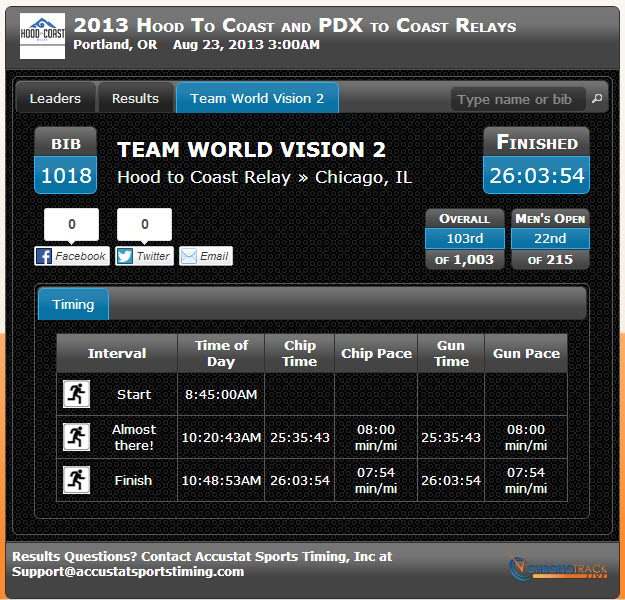 When the race was done and we had returned to the hotel as we were unpacking our vans Lopez came back over to our van to thank us for being a part of this. While he was there I asked him if he would sign one of his books for my son. I reminded him of his name and he told me, “Yes, I remember” and he proceeded to write to Keegan about the conversation he had had on the phone with him about 12 hours earlier.

This man, Lopez, after talking to hundreds of people over the weekend and taking probably a thousand pictures and signing hundreds of auto graphics remembered the exact conversation he had with my son. This to me proves that he is the real deal and his fame has not gone to his head at all and that he is using it (his fame) for the betterment of mankind.

Also just as an aside note Lopez got three of his Nike team mates to be a part of this event as well. Pictures of them were on the first page. Asthon Eaton, Shalane Flanagan, and Alan Webb.

My personal total as of the time I am writing this to you is only $7,670. My goal was to raise $10,000 myself and I have not done that yet. I really just need 47 people to donate $50 to world vision in order to make that goal. I do have a few more people who said they are sending me checks so that will help. But it’s not 47 people.

Would you consider helping me complete my goal? Listen that’s 47 more kids who would receive clean water for life. Plus their families would benefit too. All you would need to do to help is either write a check made to World Vision and give it to Melissa at the front desk or you can still donate online by going to www.DuaneBrumitt.com

Thank you for your help,